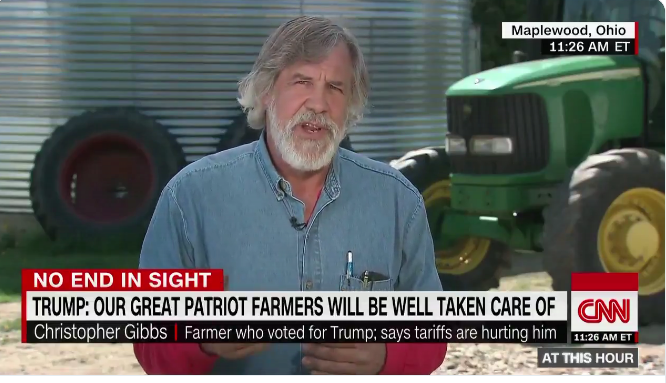 One farmer in Ohio who voted for President Donald Trump in 2016 told CNN’s Kate Bolduan on Wednesday that he is now officially off the bandwagon.

During an interview about the continuing trade wars with China, farmer Christopher Gibbs said that the president’s insistence that farmers would profit spectacularly from his tariffs wasn’t reflecting the reality on the ground.

“We’re in a free fall out here in agriculture!” he said. “We’ve seen a 30 percent decrease in the price of soy beans.”

Gibbs goes on to say he “got off the Trump train” after the infamous Helsinki summit with Vladimir Putin.

This Ohio farmer voted for President Trump. He now says the President’s comments about farmers being “patriots” during a trade war are “just a design to make me continue to be quiet. And I’m not going to be quiet.” https://t.co/7nA4p5pjEf pic.twitter.com/naTUHpSEF1

The post Farmer Who Voted For Trump Laments Cratering Crop Prices After Tariffs: “Agriculture Is In Free Fall” [VIDEO] appeared first on Joe.My.God..

Trump And Putin Bond On “Getting Rid” Of Journalists