Just days ago a Statement of Organization was filed or updated with the Federal Election Commission by Schock for Congress.

The date shown is June 7, 2019 and the form indicates it was signed by Schock himself.

The office sought is listed as Illinois’ 18th Congressional District and the party? Yep, still Republican.

The 38-year-old is also named as the Treasurer, although there’s not much to tend to since the Financial Summary shows 0.00 funds. 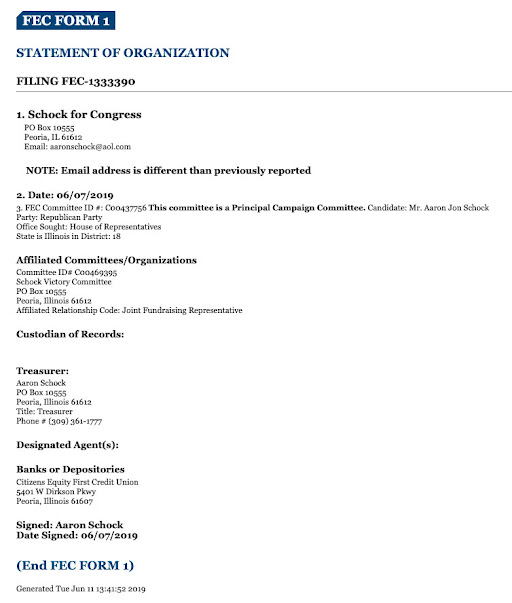 In 2015, Schock resigned from office in disgrace for alleged financial misconduct regarding his campaign funds were discovered.

Back in March, the Justice Department agreed to drop the corruption case involving false expense claims and inappropriate use of campaign funds. In exchange for paying $110,000 in restitution and taxes, the 24 felony counts against him were dropped.

The agreement did not require him to admit any wrongdoing, and left him without a criminal conviction.

At the time, the Republican told CBS News that he hadn’t shut the door on a possible return to politics at some point in the future.

“At 37-years-old, I don’t think I’ll ever say never,” said Schock. He added that he had “enjoyed being out of politics the last four years.”

Of course, we know he’s enjoyed a lot over the last few years than just “being out of politics.”


The ‘totally-not-gay’ former Congressman has been spotted and photographed hanging, kissing and getting handsy with gay men at Coachella, flirting at WeHo pools and apparently getting busy on dating apps.

Now, nothing wrong with that – unless you spent your time in office opposing LGBTQ rights like voting against the repeal of ‘Don’t Ask, Don’t Tell,’ or supporting a constitutional amendment banning same-sex marriage.

For the record, Schock denies being gay. So, there.

It is difficult to imagine how a run for political office would play out.

The recent stories and photos would definitely come up at some point, and he would have to address those, as well his insistent denials about being gay.

Would a conservative-leaning, Republican district vote for him? Or, in a wider context, who would vote for him? A guy who lied over and over on the issue, and voted against a community that he’s a part of?

Does Schock have a second chapter in politics in mind?

Or, maybe he just re-upped the FEC filing for "old times sake."

We'll just have to see.
Read More on The Randy Report