Artie O’Daly drops the latest installment of his ‘Bad Boy’ video series, and this time we get not one, but two ‘Bad Boys’ making trouble for Daddy Scott.

It’s Friday night and Scott (O’Daly) is prepping for the arrival of a date (not a hookup!) when Bad Boy Jim (Drew Bradley) seemingly appears out of nowhere with Chinese food scaring the bejesus out of Scott making him spill red wine on himself. 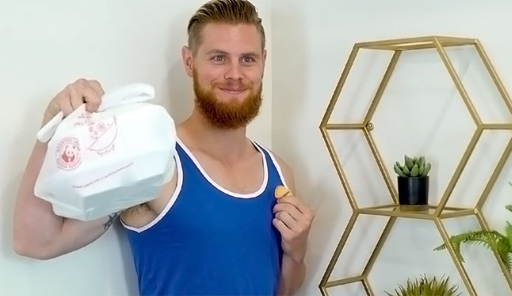 “How did you get in here?” asks Scott.

“The same way I get into anyone’s apartment - I walk in behind you, mimicked your every move and then waited in the corner until I wanted to be seen,” Jim casually admits.

No time for Chinese food, though, cause Scott has to find something to wear.

After checking for dead people outside, Jim scampers off to find some clothes for Scott.


Problem solved! Except, after locking the door behind Jim, BJ (Braden Davis) appears out of nowhere.

How do these guys get in?

“Same way I get into any apartment - stole your keys, made a copy, now I watch you sleep every now and then,” shares BJ.

Turns out he's also installed surveillance cameras to keep tabs on Scott as well - nothing strange about that, right?

It seems cousins BJ and Jim have serious jealousy issues including over the attention of ‘Daddy Scott.’

The arguing escalates between the ‘Bad Boys’ and we eventually get to some shirtless wrestling to determine who gets ownership of ‘Daddy Scott.’ Jim might have the edge here considering his time spent on the stripper circuit.

Clothes come off, Scott’s cute date (Doug Rogers) appears, and, well, hit play below to see how it turns out.

Props to O’Daly for his consistently off-kilter dialogue that keeps the ‘Bad Boys’ so quirky and entertaining.